In 1963, God showed Evangelist Bill Hall the need for an independent Baptist church in Greeneville, Tennessee. Although Bro. Bill was involved in full-time evangelism, he felt called of the Lord to begin a church located in the central part of Greene County. The first meeting of Central Baptist Church was held on November 17, 1963 at what is now the Farm Bureau Building on Newport Highway. As the church began to grow, the Lord blessed us with our current property located at 100 Bobbie Avenue, and in 1967 our original building was completed. 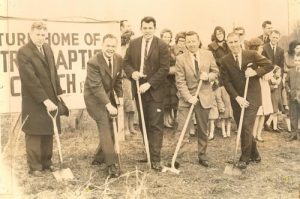 At that time Bro. Bill returned to evangelism and Bob Taylor assumed the pastorate. Under Pastor Taylor’s ministry, the Greeneville Christian Academy was founded and went on to provide Christian education to those in the area for twelve years.

God has blessed our church with godly leadership over the years. In 2016 we welcomed Brad Higgins as pastor. We are looking forward to great things in store for the future!

While the buildings, the times, and some faces have have changed since our founding in 1963, one thing remains the same: Central Baptist Church still stands unashamedly for the Word of God, without compromise.